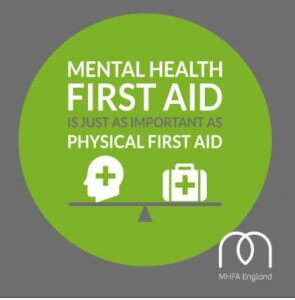 To support our children and young people E-ACT have trained ten members of staff to be trained instructors of Youth Mental Health First Aid. This has enabled the instructors to go into the academies and train academy staff as Youth Mental Health First Aiders. This will enable them to provide information, tools and techniques to promote a young person’s mental and emotional wellbeing and support a young person who might be experiencing mental and emotional distress.  Training for academy staff started in September 2017. As a result, E-ACT (North) has currently 80 members of staff fully trained as ‘Mental Health First Aiders’. The training will continued to rolled out every term for all staff who work with children

In the UK, there is an estimated 4.6 million people in work who may have a common mental health problem. That equates to 1 in 6.8 employed people experiencing mental health problems in the workplace (OECD, 2013). Between one in five and one in six working age adults is depressed, anxious or experiencing stress-related problems at any one time (MHFA, 2016). In 2013 the Chief Medical Officer estimates that around 70 million working days are lost every year because of mental ill health, costing Britain between £70bn and £100bn.

Everybody experiences mental health, however mental health and wellbeing (Being comfortable, healthy or happy) sits along a continuum which we all move along and up and down. The impact that mental health and wellbeing has on employees is a significant concern that E-ACT is very aware of.  By partaking in the Adult MHFA training E-ACT are seeking to create a climate where people feel confident to talk openly about the problems they are experiencing and trust their employer to do the right thing by them.