Our Combined Cadet Force (CCF) is part of a partnership between the Ministry of Defence and schools. ERACA CCF is affiliated to the Royal Regiment of Fusiliers with a contingent strength of approximately 30 cadets with plans to increase the number to 100 plus by 2021. Our CCF officers are all committed members of the school staff. The cadet training teams of the regular Forces support our CCF officers and we are able to use service facilities for camps, training weekends, visits and courses. The CCF draws on various different aspects of military training such as first aid, navigation, marksmanship, field craft, weapon training and drill. The CCF can support cadets to achieve the required standards to complete the Duke of Edinburgh Bronze and Silver Awards.

Aims of the Unit

The aim of our CCF is to help our young people develop as leaders and to promote qualities of co-operation and teamwork, discipline, resourcefulness, responsibility, independence, endurance and determination.

The CCF parade every Wednesday night for training on the school grounds. The training runs from 2.40pm to 4.30pm.

ERACA CCF has the resources to cater for a contingent for up to 100+ cadets. Students from year 8 [13yrs] who attend ERACA School are welcome to apply to be a part of the CCF.

Significant events throughout the year

We believe that all cadets should experience a variety of activities to enrich their experience whilst part of the CCF. Each year our cadets have the opportunity to be part of the annual camp held at a purpose built MOD training camp and participate in other experiences such as Outdoor pursuits, skill at arms events or weekend expeditions. The Cadets will participate in both school and the wider community functions in their duties, such as attending Awards, parents, transition and open evenings. They will also attend Royton and Shaw Cenotaphs on Armistice.

The cadets were put through their paces in an action packed week of challenging pursuits, live firing, training in built up areas (TIBUA), training in Woods and Forests, Platoon attacks, advanced tactics, leadership training and Outdoor Adventure Activities in Ullswater. Cadets were also able to participate in a live firing range day where they fired live rounds from the L98A2 Cadet Rifle and there are plans to use the LSW A2 automatic support weapon on future outings.

23 Cadets from ERACA CCF joined cadets from 13 schools along with ACF cadets from across the country to commemorate Army Cadet Armistice 2018 with a poignant trip to the Somme. This year marks 100 years since the end of WW1, and to honour and commemorate those who fought and died in the war, the Army’s Cadets (ACF and CCF) joined for the single largest event in their history. Over five days, nearly 5,000 young people visited memorials significant to their cap badge at locations across the Somme in northern France, the site of some of the worst fighting in the First World War. 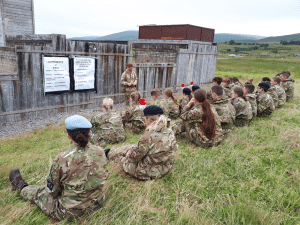 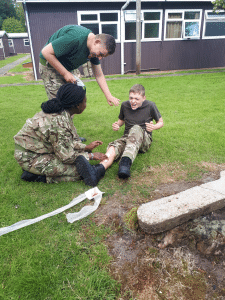 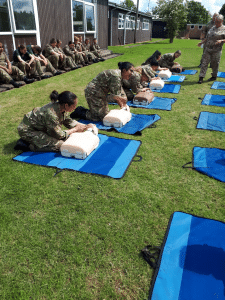 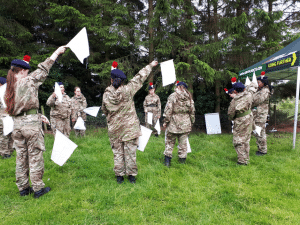 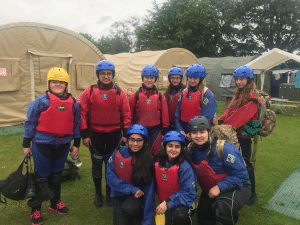 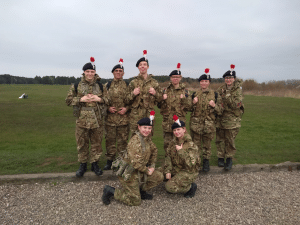 History of the Combined Cadet Force

The tradition of cadet units in schools goes back over 150 years to the 1850s. In 1948, the Combined Cadet Force was formed, covering cadets from all three Services.

In 1859, the idea of cadet units in schools was developed by the Secretary of State for War, Jonathan Peel – who wrote to public schools and universities, inviting them to form units of the Volunteer Corps. Several schools took up the idea, and the first Cadet Corps in a school was formed in 1860 at Rossall School. Other units formed soon after at Eton, Harrow, Rugby, Hurstpierpoint and Felsted School – although Felsted School’s armed drill contingent pre-dated the 1859 letter from the War Office.

These early units were focused on Army activities, and were usually associated with Rifle Volunteer Battalions for Home Defence, with cadets wearing the uniforms of their parent volunteer battalions. The Corps evolved over time, focusing on Officer Training – and during the World War I and II, many of the young men who served in the units went on to serve their country in the Armed Forces.

After World War II, the structure of the Armed Forces changed, including the cadet units in school, which became the Combined Cadet Force in 1948 – incorporating sections from all of the Armed Forces, the Royal Navy, Royal Marines, Army and Royal Air Force. Over the following decades, the focus of the group moved away from being a recruitment pathway in to the Armed Forces, the number of CCFs in state schools slowly grew – and for the first time girls were allowed to join.

Today the Combined Cadet Force contingents are very different to those early groups of young people. Although they are still based on the ethos of the Armed Forces – their focus is on helping young people to develop and reach their full potential by providing challenging, active, adventurous and fun activities.

Aims of the CCF

The general aim of training in the CCF is to develop the cadet’s power of leadership. This is achieved through training to promote the qualities of responsibility, self-reliance, resourcefulness and a sense of service to the community. In addition it is intended to give cadets a background knowledge of the way of life in the Services.

Royton and Crompton CCF goals are that at the end of their time in the CCF (around 3 years) cadets should:

Pupils from Royton and Crompton E-ACT Academy are eligible to join the CCF the September after they enter year eight. The CCF is open to all pupils and participation is voluntary. The CCF is not a recruiting agency and we welcome all pupils regardless of their intentions to join the Armed Forces or not.

In order to join, pupils will need to complete a joining form and have all sections completed and signed by parent(s)/ guardian(s). Due to the training that will take place, Cadets can enrol up until 1stJanuary after this date pupils will not be eligible to join until the following September. Exceptions to this can be discussed on a case-by case basis with the CCF Staff.

Pupils wanting to leave the CCF are encouraged to speak to a member of CCF staff. Should they wish to pursue leaving the CCF all issued kit must be returned in a serviceable state. Failure to return kit will mean a charge for the replacement will be made.

Cadets are able to remain within the CCF from years 8-11. Year 11 leavers are able to remain members until the last day of summer holidays subject to the head teachers’ approval to attend courses during this time. Cadets who are going into further education in the local area and still wish to be part of the CCF are to speak to the contingent commander at the earliest opportunity.

Pupils joining the CCF will be issued with the following uniform:

Boots are not issued and need to be purchased at the cadets own expense.

It is the Cadets responsibility to look after and maintain this uniform. Where possible the uniform should contain the cadet’s name. Should an item no longer fit or is un-intentionally damaged/ worn it can be returned to be swapped. Cadets are not permitted to wear any issued uniform outside of established cadet events. Upon leavening the CCF cadets are required to hand in their uniform or face paying the charges for replacement.

Other uniform, kit and equipment may be issued to cadets for certain events. Again it is the cadet’s responsibility to look after such.

Pupils will join CCF as a junior cadet and be allocated to one of the three sections. Sections will be led by a cadet Non Commissioned Officer’s (NCO). Appointment to this rank will be awarded on merit to pupils showing leadership skills. In order to keep the structure stable there will be limited number of positions as an NCO dependant on the size of the CCF.

RT @RoytonCrompton: At Royton and Crompton E-ACT Academy, we want to raise aspirations and confidence in our current and future students. W…